Jasmine Scibilia and Dr Michelle Negus Cleary from Dr Vincent Clark & Associates recently spoke at the La Trobe University Archaeology Seminar Series, a weekly event hosted by the Department of Archaeology and History. The archaeologists discussed their work on inner-city archaeological projects which are becoming more and more frequent with the increase of development in Melbourne. The event was well attended with an engaging discussion after the talks.

The following are abstracts of the presentations:

I’m Going Through A Phase: The Transformation Of Jones Lane Archaeological Precinct 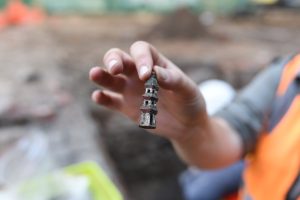 At the northern extent of Little Lonsdale Street, concealed behind a red brick wall and buried beneath a car park at the Wesley Church, are some of the most telling remains of early Melbourne. Cobbled surfaces, cellars, bluestone walls, fireplaces, doorways, bottle dumps and cesspits were some of the features unearthed during excavations at Jones Lane Archaeological Precinct in 2017. These features, which span several phases of occupation from the early 19th century, were preserved below a thick deposit of clay some two meters below the current street level of Melbourne.

The survival of such intact structures and deposits within an ever-developing CBD is a miracle, made even more significant by the hundred thousand artefacts recovered. The clear distinction between phases of building and demolition at Jones Lane tells a history of a city adapting to rapid growth, changing population, expansion and environment. The results of the excavations at Jones Lane also contributes to our understanding of Melbourne’s buried past and how we excavate and manage historic sites within the CBD.

What lies beneath: archaeological investigations of the Cato Street Carpark, Prahran Surface carparks dating from the mid-late twentieth century in urban contexts often provide protection and good preservation of archaeological structures and deposits related to earlier periods. This is certainly the case for many instances in Melbourne metropolitan area. The City of Stonnington have begun a major redevelopment of an existing ground-level car park that covers an entire inner-city block, transforming it into a new urban square and green space known as the Cato Square development. Dr Vincent Clark and Associates were commissioned to design and oversee the heritage management and archaeological investigation of the Cato Street Carpark historical site.

The results of the archaeological investigations were surprising and revealed far more was preserved than expected at the site, ranging from the mid-19th century, first European occupation of Prahran, to a residential and emerging commercial phase of the 1860s-1890s, then the early to mid-twentieth century retail and light industrial transformation of this location behind Chapel Street. Remains of rural buildings and houses, terrace houses, wells and an entire basement high-end retail space of the Big Store were investigated. The project was a unique opportunity to archaeologically investigate such a large area of inner-city Melbourne within one of its most well-known and celebrated commercial precincts.